Star Wars has always meant a lot to me, which should seem pretty obvious considering I write a Star Wars blog. But as I have grown in areas outside of my fandom, I have found that my fandom has grown in congruence. Much of this is due to the fact that, as I have opened myself up to new possibilities in life, particularly becoming a teacher, I have opened myself to new possibilities in Star Wars. Teaching has revealed the Star Wars galaxy to me in ways I could never have imagined.

Being that I use Star Wars as a means to teach, I have been lead to seek out different media that I never before would have considered watching, reading, or investing in before .The first way that this happened was with The Clone Wars. When the idea of an animated Star Wars show first came about I thought it to be blasphemous. Star Wars was supposed to be live action and there was no way that the sacredness of Star Wars could be captured in a 30 minute children’s show. I will admit that this sense of disenfranchisement came more so from the fact that I didn’t think there had been any good cartoons in a long time (I mean how are you going to top Gargoyles or Rugrats?!), but it also came from a sense of elitism. I was a real Star Wars fan and that meant the movies and books, not some silly show.

I write this how a humbled man. When I first started teaching it was in a Pre-K classroom,  and I had some kids who loved Star Wars. Yet they knew it only through the television show. Being that I have a weak spot for kids, and trying to find unique ways to reach my students, I checked out The Clone Wars. From the very first episode, I was hooked. I have now watched The Clone Wars twice through, and although it is admittedly hit or miss, it’s hits far outnumber it’s misses. (Plus the hits are clean out of the park.)

After this experience, I decided it was time to open up my Star Wars heart and let in new parts of the galaxy. One such way that I have done so is by bringing Star Wars in as a tool for teaching, primarily through the books. As I now teach fourth grade, I really cannot read them most of the Legends books. Plus, that’s not really where the students’ interest lies. Instead I have taken the time to read through, and share, the junior novels that have come out, particularly those surrounding Rebels and The Force Awakens. Right now we are reading the new interpretation of Episode IV, The Princess, The Scoundrel, and The Farm Boy, which is going to open up the opportunity for me to show them the original film. While I have not read all of the new junior books, I’ve read enough to come to a very clear conclusion: these stories matter.

Most recently I read Rey’s Story, which is a telling of the events of The Force Awakens from Rey’s point of view. First, I must say that this books was absolutely wonderful. But more importantly, it gave great insight into the character of Rey. Now, as I think back on the events of TFA, I appreciate the internal struggle and personal growth of Rey so much more. And that is saying quite a bit considering how much I love Rey.

This is not true for just Rey or just The Force Awakens. The junior novels leading up to The Force Awakens also added much to the characters we already know. Particularly in the book about Luke, Weapon of a Jedi, I feel like there was great insight given to Luke’s struggle with becoming a Jedi. In my opinion, the Legends books never did this very well. Being how fragile his belief in his ability to become a Jedi appeared to be in the book, it does not seem like a stretch that he would have abandoned the galaxy in pursuit of more knowledge after the turn of Ben Solo. The story group has done a tremendous job of crafting a narrative that crosses mediums, which is no easy task. 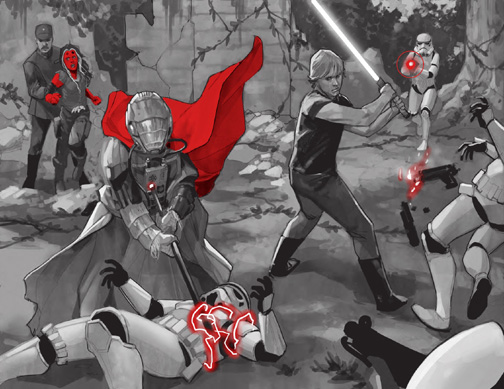 What does this all really mean? Well, frankly it means that we, as fans of the saga, need to remain open to all that it has to offer, regardless of medium or “target” demographic. This certainly does not mean that we will like it all (*cough cough* Heir to the Jedi *cough cough*). Nonetheless, we should accept, and honestly should be thankful, that the Star Wars story is now bigger and grander than we ever could have imagined.