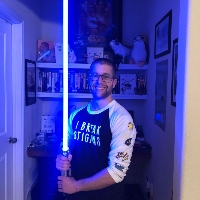 As an elementary school teacher, Brandon would never tell his students that he pretended to be sick so he could stay home and watch Return of the Jedi on repeat. Twenty years of being a Star Wars fan later, not much has changed. Return of the Jedi is still his favorite movie, he still hangs out with  ten-year-olds, and he still tries to spread Star Wars to the next generation. Now he just has to pay for it all with his own money. 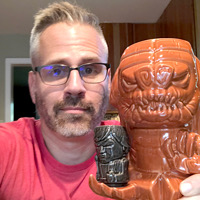 Mark saw the original Star Wars in theaters in 1977 but it wasn’t until he laid eyes upon Tauntauns and AT-ATs in 1980 that he truly became a fan for life. With a background in studio art and illustration, he is a graphic designer by day. He has found a new passion in the writing, recording, and sound mixing that goes into his podcast series Forever Star Wars on the Clashing Sabers Network. Mark’s other interests include paleontology, quantum mechanics, gaming, and travel. Mark shares a home with his husband Steve and their two dogs, Colby and Dutch. 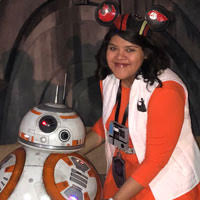 When people ask Adriana about when she first saw Star Wars, she can’t give an answer because she honestly cannot remember a time in her life when she didn’t know and love Star Wars. As a special education teacher, Adriana may or may not try to convert her students into fellow fans. When she is not podcasting on Star Ships, you can usually find Adriana at Disneyland riding Hyperspace Mountain or at home cuddling her dogs Iroh and Poe (yes Poe, named after Poe Dameron himself).

Drew’s first encounter with Star Wars was probably around 5 years old, watching Empire Strikes Back when it was on USA Network one Friday night.  From there, he subjected his family to watching the classic trilogy approximately once a week until the Special Editions were released in theaters in 1997.  It spiraled out of control as he started collecting the Star Wars CCG (based on an already-existing love of Magic: The Gathering), the Expanded Universe books, and the RPG source books.  Drew and his wife Leslie have three kids at home, none of whom understand why he keeps buying Black Series figures but not opening them up to play with. 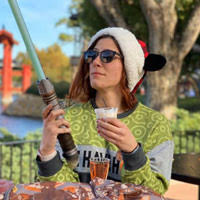 When Lindsey was nine years old, her parents assumed this whole “Star Wars thing” was a phase. Flash forward a couple of decades and they’ve accepted it was very much not a phase. Her book, lightsaber, and toy collections are always growing. Sometimes she even shares with her two young nephews. Since Lindsey doesn’t get to extend these stories to younger generations in her professional career, she’s extremely passionate about using her spare time to do so.