As an elementary school teacher, I am always looking for simple ways to convey complicated ideas, particularly when it comes to poetry. A significant mantra in my classroom is “repetition equals importance”. That is to say, if a word or idea repeats, the author is showing you that said thing is important. Likewise, I also teach students that “difference equals importance.” For example, if a poet is repeating something, but putting a twist on it, pay attention.

One idea that is present across all of Star Wars, and thus is important, is that of characters receiving visions from the Force. Now that the Skywalker saga has come to its conclusion,  it is imperative that we look at the visions, and more importantly the reactions to said visions, by our three protagonists, Anakin, Luke, and Rey.

Anakin’s fall starts with visions of Padmé dying in childbirth, which terrifies Anakin because his visions come true. As a child, he dreamed/had a vision (for the sake of simplifying and not getting too caught in semantics, dreams and visions will be used as synonyms, as that is how Star Wars generally presents them) of becoming a Jedi. He became a Jedi. In Attack of the Clones, he has dreams of his mother suffering. Anakin reacts by going to save her, which is undoubtedly the right move. However, his approach is not that of a Jedi, nor even a healthy individual. He acts, and reacts, in anger, thus taking his first real steps to the dark side. 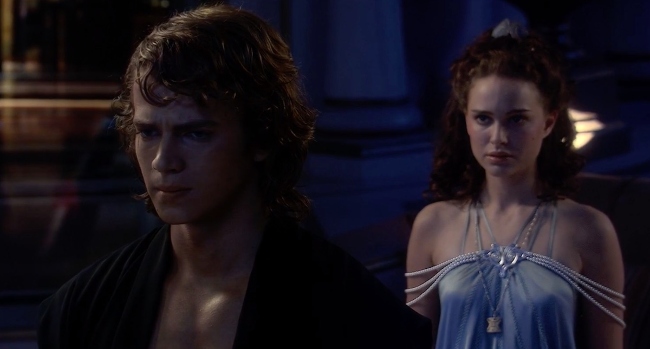 In Revenge of the Sith, Anakin once again has visions of someone he cares about dying. This time it is his wife, Padmé , dying in childbirth. Anakin tries to overcome these visions because of what happened with his mother, and in doing so makes the vision come true. Again, trying to save Padmé was the right thing to do; the issue comes in how he tries to do it. Instead of trying to understand what the Force was trying to tell him, he tried to control it. It probably didn’t help that the only person he could really talk to about it was the one person, Palpatine, that he didn’t need to be talking to about it, but at the end of the day he made his choice. That choice was to trust ego over the Force. He would have to live the rest of his life with that mistake. His lack of faith, you could say, is disturbing.

Luke’s major vision comes when training with Yoda on Dagobah. Like Anakin, Luke has a vision of those he cares about suffering. Thinking he is the only one who can do anything about it, he rushes off to Cloud City, right into the trap set for him by Darth Vader. There is a very important difference, though, between the two scenarios. Anakin, particularly with his visions of Padmé  dying in childbirth, sought the help of others. However, his inability to be fully honest with anyone except Palpatine traps him in a corner. Luke thinks he is the only one who can do anything about his vision. He ignores the warnings of  his Masters, both who have seen what happened to Anakin, because he wants to be the hero. Instead, he falls right into Vader’s trap. Vader and Palpatine knew that the Anakin in Luke would not let those he cares about suffer without trying to do something about it.

So what is the difference between Luke and Anakin with regards to their visions? The lesson they take from it. Anakin is let down by those who were supposed to help him, and thus he falls right into the trap set for him by Palpatine. This failure by his support system, particularly Yoda and Obi-Wan, causes Anakin to literally isolate himself within the shell that is Darth Vader. Luke, in contrast, doesn’t trust his support system and fails because of that. Transition to Return of the Jedi, in Jabba’s Palace and on Endor’s moon, to see that Luke is now trusting those around him. He even listens to Yoda when he is instructed to face Vader, albeit he does so in his own way.

What makes Luke the quintessential hero is that he learns from his mistakes. Anakin never did. When things got worse, he tried to solve his problems with a lightsaber. Luke, however, found a different way to do things because he learned from his mistakes, but he also never lost his heart. This is what makes him the legend that will eventually inspire….

In Rise of Skywalker, we find out that Rey has had a vision of Kylo Ren and herself sitting on the throne of the Sith. Like Anakin and Luke, she believes she is the only one who can do anything about it. She’s the hero and that’s the job description. Yet there is, once more, a very important distinction between the three. Anakin doesn’t trust anyone with what is really going on because the foundation of his life is a lie. He wants to help of others only so much as to support his ends and ego. Luke doesn’t trust anyone because he is foolish to the point of naivete. Rey doesn’t trust anyone because she loves and values her found family too much, and wants to bear the burden in their steed.

While Rey hides the vision from her found family for some time, once she is aware that it is causing her to become a danger to them, she shares. She’s open and honest with Finn in a way that Anakin never would be with Obi-Wan. Nonetheless, she does rush off like Luke, right into the tempest sea holding the shards of the second Death Star. She fails epically because she did not trust others nor the Force. After killing and resurrecting Kylo/Ben, she isolates herself on Ach-To so as not to cause her found family any more pain.

Rey spends the majority of Rise of Skywalker afraid of herself and what she can cause to happen. That is not something we see with Anakin, and it is a quality only briefly displayed by Luke as he looks down at his mechanical hand and his defeated father in the Emperor’s throne room. Luke tells Rey, “Confronting fear is the destiny of a Jedi.” This is her “you must confront Vader” moment, where she has to decide if her fate.

Rey doesn’t do it alone. She guides the Resistance to Exegol. She unites with a redeemed Ben Solo to face down Palpatine. When all seems lost and the Emperor is going all zappy-zap on the Resistance ships, Rey is united with the generations of Jedi before her and is able to rise. She takes not only all she has learned, but all they have learned, symbolically represented by Luke and Leia’s lightsabers, to become “all the Jedi.” Her path is not one of hiding, as was Anakin’s, nor knight in shining armor, as was Luke’s. Her path, and the path of the Jedi, is one of unity, trust, and faith not in self, but in others, in family, and in the Force.