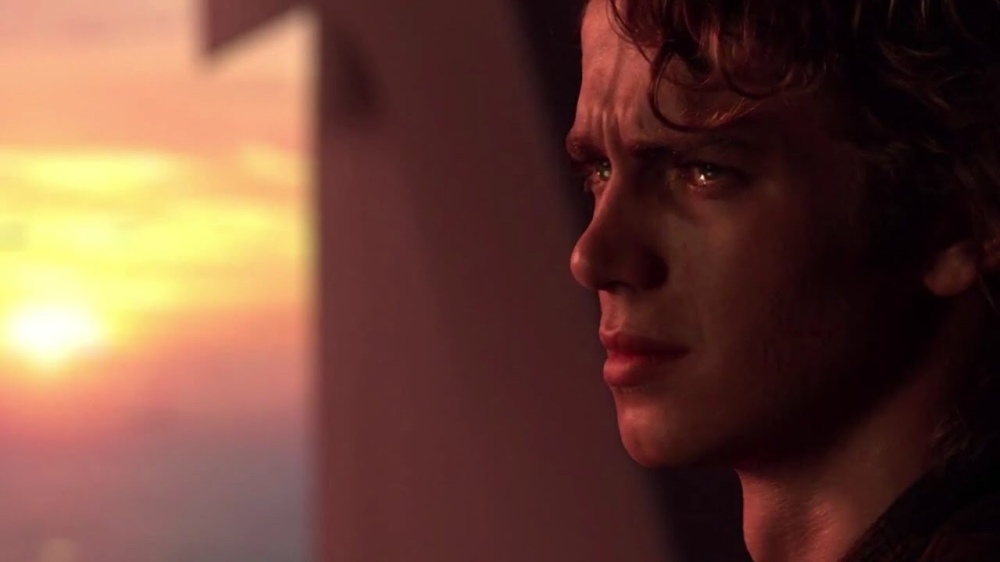 The loss of someone close leaves a hole in your life. You find yourself acutely aware of the absence. It’s a tangible, hollow thing, this absence. There is an ache centered right at the very heart of you; literally your heart. That’s why they call it heartache.

When little Ani stood before the austere gazes of the Jedi Council, and tried his best not to fidget or look as frightened and bewildered as he must have been, Master Yoda sensed the child’s discomfort. Instead of offering words of reassurance and comfort, Yoda put Anakin on the defensive.

In one of the more curious moments of The Phantom Menace, Yoda welcomed the new candidate with suspicion and accusation. Yoda was quick to establish that they could peer into the boy’s mind and uncover his secrets. Anakin was compelled to tell the truth because the Jedi would know otherwise. Anakin confessed that he missed his mother.

Anakin was 9. Of course he missed her.

While Yoda was aware that heartache and longing was natural in a child, he used it as an opportunity to lecture Anakin about the perils of the dark side. Strong feelings of attachment were not welcomed in the Order. Jedi valued their dispassion. Jedi were not tempted by such unstable emotions. Jedi did not grieve like others grieved.

Anakin received this first lesson on his path to becoming a Jedi: do not mourn loss. How would Anakin’s life have been different if he had been given a natural and healthy way to express his longing for Shmi? Instead he was forced to bury it deep inside where it only grew stronger with time.

A Hole in the Heart

Even when you know loss is imminent, you try and prepare yourself. You imagine how sad it will be when you finally say goodbye to someone you love. You brace yourself for that day, never knowing exactly when it will come. But you can never truly prepare. The part you don’t think about—the thing no one tells you—is how hard loss is the day after. And the next day. And the next.

The hole in Anakin’s heart was an open wound. He had nightmares about his mother. He saw her suffering. And he felt helpless to stop her suffering. When Anakin’s threshold for emotional pain got to be too much, he took matters into his own hands. But he was too late. Finding his Mother, only to have her die in his arms, ripped open the hole in his heart. He lashed out in anguish, pushing himself to the edge of darkness. And one step beyond.

There was no excuse for the atrocities he committed. But Anakin had no one to turn to for understanding. He didn’t feel he could turn to Obi-Wan. His Master would have only spouted the same rhetoric as the Council. So in his grief he turned to the one person who was there. The one person who would do the very thing Anakin needed most.

A Warm and Loving Companion

Ernie was the name I gave to a ball of fur with a funny little tuft of hair on top of his head. The tuft reminded me of the hair on the head of Ernie of Sesame Street. Only the Muppet’s hair was black. This puppy’s fur was almost white. Didn’t matter. Ernie was still a great name. So the 10-week-old Labradoodle was christened Ernie on the ride home.

On his first night away from his momma and his litter mates, he cried as all puppies do. I kept him in a box beside my bed. I noticed that as long as my hand was in the box, stroking him, or just next to him, he didn’t cry. So I slept on my stomach with my arm hanging down in the box so Ernie wouldn’t feel alone.

For the next 15 years, Ernie was never alone.

Padme was a beacon of hope–a reassuring presence in Anakin’s life. She showed him empathy at the most painful moment in his life. She didn’t understand the Jedi’s mystical connection to the Force, or the dangers of the dark side, but she gave Anakin support when he needed it most. She stood by his side when he needed an ally and an understanding ear. Having a healthy and supportive outlet for grief was what allowed Anakin to move on after the death of Shmi.

Anakin and Padme chose to keep their love a secret, which pushed their expressions of that love into the shadows where it befell whispers. Not having their love validated by the people closest to them made Anakin and Padme grow ever more dependent on each other.

But Anakin’s dependence was more than just love. It was also control. He was consumed again by the fear of loss when he saw visions of Padme dying in childbirth. He had suffered the guilt of not saving his mother. He refused to experience that kind of sadness again. He was determined to change the future.

Anakin’s great mistake was seeing tragedy or loss as something that could be avoided or fixed, rather than something to be endured or weathered like a storm. The strength to get through loss creates its own strength. Anakin ignored this simple truth. He was spending too much time thinking about what might happen and how he could stop it. If Anakin had been given permission to grieve, he might have done things differently. But Anakin was never given the tools necessary to work through his pain, even when he reached out to his teachers for guidance.

The Road Ahead. The Road Now.

It seems so senseless… the painfully short life of dogs. For creatures so devoted, so loyal, with so much empathy and unconditional love, it is cruel that we should live so much longer than them. But we do. And when our friend reaches a certain age, we know there is less time ahead than has passed.

As he grew old, I was keenly aware of how special each and every day with Ernie was. Dogs live in the moment. They don’t understand mortality the way we do. Ernie had no clue what was ahead. That was my burden to bear. But I chose to cherish my time with Ernie, never taking a single day for granted. Ernie gave me that gift—living in the moment.

Visions of a troubled future and the fear of Padme’s death drove Anakin to seek council with Master Yoda. Having kept his marriage to Padme a secret, Anakin was guarded. And perhaps he masked the depth of his feelings to such a degree, Yoda was unable to sense the extent of his pain and suffering. So Yoda did what he always did as a Jedi Master, he extolled the wisdom of his nearly 900 years.

Yoda had seen many friends live and die. He had a unique perspective that only someone of advanced years could adopt over time. Yoda saw the cycles of life and death and how beautiful it all fit within the balance of the universe and the Force.

But Yoda was ignoring the pain right before his eyes.

“Death is a natural part of life,” he told Anakin. “Rejoice for those around you who transform into the Force. Mourn them do not. Miss them do not.”

This was the worst thing Anakin could hear in his moment of need. Feeling the loss of someone you love is not something to suppress or ignore. Sadness is natural. It’s a reflection on how much someone has enriched your life, and how your life will change in their absence. We can move on from loss, but we must first grieve. Grief honors the memory of the deceased. For Anakin, that was never an option.

Recently, on New Year’s Day, my husband and I took Ernie for a walk in the park. It was a beautiful and surprisingly warm day for January. Ernie may have slowed down in his old age, but he was still full of life. He was a reliable and steadfast presence on our walks, always at my side. Never too far ahead. Never behind.

But near the end of our walk, Ernie’s legs gave out. He collapsed to the ground in an uncharacteristic stumble and he couldn’t stand for several minutes. This had never happened before. Something was very wrong.

A few days later, Ernie completely lost the use of his back legs. He couldn’t get up to drink, to eat, or to go outside. I had always worried that Ernie would experience a slow deterioration in his old age which would make the decision to say goodbye much harder. But this was not like that. This was sudden. It was dramatic. The choice was clear.

Anakin’s fear of losing Padme became a self-fulfilling prophecy. His choices created a cascade reaction that ended in her eventual death. His anguish was manifest in the cruelty Darth Vader inflicted upon the Galaxy. What was left of Anakin was encapsulated within a suit, much of his body surrendered to the cold embrace of technology keeping it alive. Enduring agony became his prison.

Anakin was never taught how to grieve. The only sources of warmth and empathy he ever knew were taken from him. The Jedi were his family, but their dogma never allowed Anakin to express any significant love for his Master Obi-Wan, or Master Yoda, so he remained emotionally detached from the Jedi Order. He suffered in silence.

On Monday, January 6th, shortly after 11am, we said goodbye to Ernie. He was at home, surrounded by love as he closed his eyes for the last time, my hand on his head where it had been for so much of his life. It was the hardest thing I’ve ever done. And yet…it was beautiful.

I owed so much of my happiness to Ernie, but I knew this day would come, and I would have to repay the debt. I would have to release him from my life. I would have to suffer so he would not. But I was devoted to giving Ernie the most loving goodbye I possibly could. And it happened exactly as I hoped it would.

I have no regrets about my time with Ernie, or how that time came to an end. It gives me peace.

I mourn Ernie. I miss Ernie. I always will. But I didn’t fear loss. In a way, I was trying to do what Yoda suggested. Death is part of the journey, and it’s a necessary part of life. I accepted that. And that acceptance helped me to do what was best for Ernie, rather than what was best for me. In spite of what Master Yoda said, grief is also a natural part of life. It helps us process loss and to eventually carry on with our lives.

Fear of loss can lead to a dark path, yes. But imminent loss can also make one take stock of what is important, never taking anything for granted. It makes every day a gift.

One thought on “Forbidden Grief: The Real Tragedy of Anakin Skywalker”