Powerful light, powerful dark. Balance. One cannot be known without the other being known. This idea is the core of the sequel trilogy more than it has been for the previous two trilogies.

We all have to face this darkness at some point. For myself personally, it was an eating disorder, PTSD, learning I have anxiety, depression, and ADHD, all seperate monsters that are kind enough to feed each other. These are my shadows not just for the trouble they cause me on a daily basis, but because of the damage they hide in their darkness. I’m sure you can relate, because as much as we look at our shadow and complain, someone else is thinking our shadow looks great. 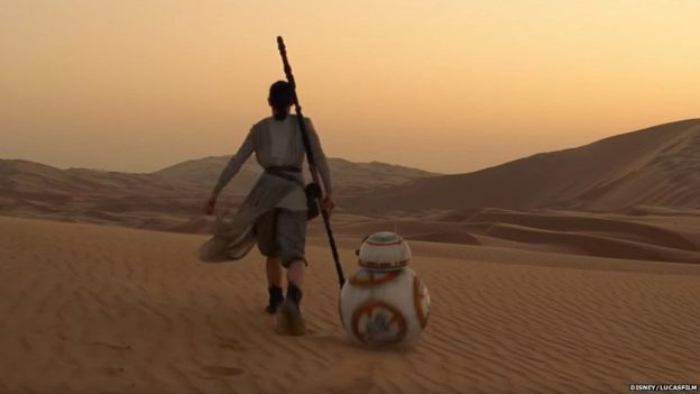 Rey is relatable because of this. Her shadow is her parents abandoning her, and it chains her to Jakku. From the desert, in her isolation, it would seem that just about anything would look better. But what makes Rey, a literal ray of light or hope for the galaxy, a hero is that she faces that shadow, which is actually manifesting as Kylo Ren.

Kylo is the ying to Rey’s yang. He wasn’t abandoned by his parents. Instead, they made a sacrifice by sending him to train with his uncle, Luke Skywalker, because they thought it was the best thing for him. However misguided, it was an act of love. Yet perception creates reality, and Ben’s perception was that his parents abandoned him, and that’s what really matters. That is his shadow.

Consider, for a moment, the visual imagery of a shadow. Shadows are created when a powerful light hits an object to create a powerful darkness, or absence of light. Rey lives on a desert planet that is all light, but light casts a shadow. So no matter how much of a ray of hope she might be, she still carries her darkness with her.

This idea links to Ben Solo as well. When his uncle, the legendary Luke Skywalker, stood over him, he cast a shadow. Luke was the sun, shining the light of what he thought was justice, down onto Ben, who now has his own shadow placed on him. It may have been for a moment, but it is a moment that created a very dark shadow.

So, both literally and metaphorically, Rey and Kylo are telling a story about light, dark, and shadows. This is the very core of the Force, as displayed when Yoda travels to the Force priestesses in The Lost Missions. Here he has to confront his own shadow so that he can overcome it. Yet to do that he mustn’t fight or have a stronger will. He must submit, admitting that the shadow is a part of him.

The shadow of all shadows, the darkness that overcame the entire galaxy, is Palpatine. As Yoda confronted his shadow, so must the galaxy. From the most recent Rise of Skywalker trailer it would appear that the whole galaxy is coming together to do that, but the focal point will be Rey and Kylo Ren.

An argument can be made that Luke confronted the Emperor in Return of the Jedi, but in reality Luke went to save his father. Palpatine was secondary. Nonetheless, TROS must avoid upending the end of Return of the Jedi by having Palpatine be back in physical form. As a shadow, it would be fitting if he came back as a perverse, twisted, dark side Force “ghost”.

Rise of Skywalker also must not rewrite what a Jedi is supposed to be, at least with regards to violence. The message of Luke’s character, particularly in Return and The Last Jedi, is that fighting isn’t the solution. Violence is what led to the fall of the Jedi, and if Rey is going to re-establish them, she must not negate that very central message.

How, then, with all of that to take into account, does one actually, finally, bring an end to Palpatine? Running with the idea that he is in some way a Force entity, the dark side manifest, the way to bring his final end is not to kill the body, but the soul. However, as Yoda shows, to end the shadow you must acknowledge that it is a part of you; Rey and Ben must do the same.

If they unite, light and dark no longer in opposition, they may be able to actually cross into the Force, a la the World Between Worlds, to confront Palpatine. This, plausibly, allows for Palptine to come back in a way worthy of such a cinematic villain, while also not negating what Luke did in any way.

George Lucas was very clear about the message of Star Wars. The dark side is selfishness, the light side selflessness. One should always strive to be selfless, even if selfish in nature. The dark side, while a reality, should not be embraced. Anakin welcomed the dark side, succumbed to it, and it didn’t end well. Only by being selfless, no matter the cost, can Rey and Ben truly bring balance to the Force.

I am a 5th grade reading teacher in Texas who has a passion for stories. Whether it is in my classroom or in the realm of Star Wars, I enjoy breaking down, analyzing, and reflecting on stories, mythology, and what they can teach us about our lives.
%d bloggers like this: