One of the reasons the Marvel Cinematic Universe works like the well oiled machine that it is can be attributed to the clear lines it creates between the good guys and the bad. Even in a film like Civil War, where we see heroes going up against each other, both sides clearly have merited stances that promise that neither side are the bad guys.

Star Wars works as a mythology, however, because it doesn’t so clearly define good guys and bad guys. There is a wiggle room that allows us to analyze our own morality standards. Star Wars forces us to consider these characters on different terms than we do Captain America or Ironman. 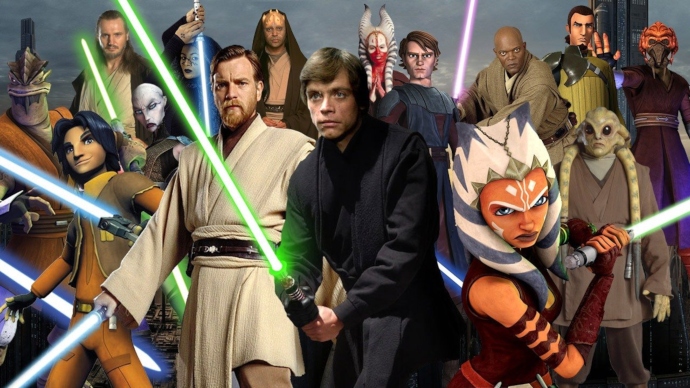 The Jedi are amongst the things we must consider upon a spectrum of good and evil. From the prequels, we learn that the Jedi are not as pure as we may have believed after the original trilogy. Still, they are far from evil. Throwing away the idea of “grey” Jedi as a faulty understanding of the meaning of being a Jedi, there is one area in particular wherein we can see the fault of the Jedi, and the potential of who they may become going forward.

In Claudia Gray’s masterpiece, Master and Apprentice, a new Jedi, Rael Averros gets introduced. He adds an important puzzle piece in the narrative of the Jedi. After killing his Padawan, he wasn’t exactly welcomed in the halls of the Jedi Temple, and therefore was sent to serve as regent for the under-aged Princess of Pijal.

Averros is an important Jedi for us to consider because of how the Jedi treated him, even before the travesty with his apprentice. Having come into the Jedi at the age of five, Rael still had attachment to his home planet and past memories. The Jedi allowed for this and gave him a lot of leeway due to his unique circumstances. However, when his actions (killing his Padawan, albeit under insinuating circumstances), didn’t fit with their narrative, he was ostracized.

Which brings us to Mace Windu, who is designed to be a lightning rod of a character. Windu’s inflexibility in what a Jedi should be is extremely problematic when the Jedi are supposed to be creatures of empathy. If he were to have his way, the Jedi would be completely based on the Code, regardless of what the Force says.

Yet this creates problems when characters like Averros or Anakin Skywalker come in. Particularly with the latter, the acclaimed Chosen One. Whereas Windu exists via rules, Anakin is…. flexible. He fits with Qui-Gon’s idea, “If the Code says one thing, and our reality says another, is there any question which we should trust?”

Thirty years later, with Luke, Yoda and Obi-Wan had to do things differently. Aside from the situations being different, Luke was the chance to correct the mistakes of the Jedi in the past. Thus, the training we see Luke receive is different. The focus moves from doctrine and back to the Force, his connection to it, and how one fuels the other. Still, Kenobi and Yoda are flawed in their limited view of what/who Luke should be. Kenobi sees no other way than killing Vader. Yoda didn’t even want Luke to know about his connection to the Sith Lord. Sometimes an old dog just can’t learn a new trick.

One of the reason so many people like Qui-Gon is because he is who Luke would be if he were a part of the original Jedi Order. He has the flexibility to adjust to the situation, as he does on the second Death Star, but also a set of standards by which he lives. However, he was far from perfect, as we see in The Last Jedi. He knew how to live his life, but didn’t know how to guide others, which is what broke him with Ben Solo.

The Jedi so often get lambasted as the “bad guys” of the prequels, and while they do deserve some blame for the fall of the Republic, where they were more at fault was in their inability to adjust to the personalities in their ranks, and therefore limited who a/the Jedi could be. Yet, “the greatest teacher, failure is.” With a thousand generations living in Rey now, that is plenty of good and enough bad for the new Jedi to evolve from.

What this means, of course, will remain unknown until December. Story wise, Rey has to handle the fact that her new order has to allow for individualism while still having moral standards. Ask any religous leader, this is not an easy thing to do. But no one said being a hero was easy. And a hero Rey most certainly is.

I am a reading teacher in Texas who has a passion for stories. Whether it is in my classroom or in the realm of Star Wars, I enjoy breaking down, analyzing, and reflecting on stories, mythology, and what they can teach us about our lives.
Loading Comments...
Comment
×
%d bloggers like this: