Skip to content
Posted on April 16, 2018 by Brandon Boylan

“Mirror, mirror, on the wall, who are Rey’s parents after all?”

Since the release of The Last Jedi, there have been two scenes that have caused consternation and debate across the fandom. First and foremost is the Leia flying through space scene. The debate around it is a multifaceted and begs us to ask many, many questions. However, those questions are all focused on execution, not content (at least from all but angry fanboys who hate anything that is not in the OT.

The second such scene is the mirror cave scene with Rey. The debate around this one breaks down to one simple question, “What in the name of C-3P0 is going on?” Unlike Luke’s cave adventure in Empire Strikes Back, the meaning behind Rey’s experience in the mirror cave is not clear. At least, not at first brush. 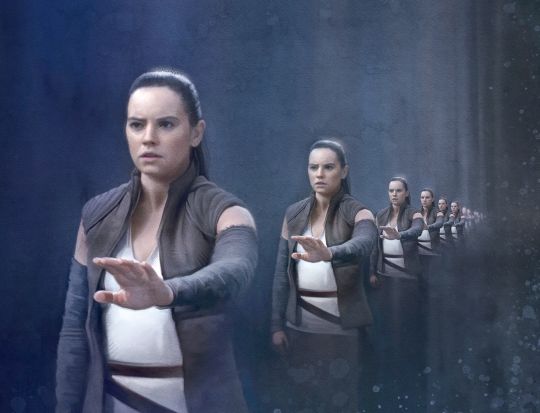 Complicating the debate a little further are recent comments by director Rian Johnson, who said that when he started creating the scene he didn’t really know what it meant. He just had this idea and feeling that it would be what the film need. Fanboy rage over this idea was palpable, but this is what creators do. In fact, as I write this article I am figuring things out as a construct sentences. That’s the creative process and the value of the scene should not be negated because of how Johnson developed it. At the end of the day, the final result is what matters, and in this case the final result is a scene fans will be discussing for generations to come.

As the scene begins, we see Rey slowly inching towards the pit that welcomes her to the dark side cave. As Luke said previously, it offered something she needed and she did not even try to stop herself. Prior to this moment, Kylo had lambasted Rey for still needing her parents and looking for them in every new mentor, be it Han Solo or Luke Skywalker. Just as Luke’s drive during the first stages of his hero’s journey came down to him wanting to follow in the footsteps of his father, Rey’s drive is to “figure out [her] place in all of this.” The cave does not just offer that, it literally drags her into itself and demands that she do exactly that.

A major part of the hero’s journey is the hero going into the belly of the beast, which essentially breaks down the character ending up in the worst possible situation he or she could end up in. Rian Johnson spoke to this idea in the documentary “The Director and the Jedi,” wherein he shares that the basis of his story came down to the idea of putting each character into the worst possible situation he or she could be in. Luke Skywalker, in Empire Strikes Back, has his belly of the beast moment in the depths of Cloud City, where he learns that the bad guy he just wanted to destroy is his father. Is a part of himself.

For Rey, a character who has spent two films unto this point trying to figure out where she belongs, the worst thing that could possibly happen is learning that maybe she doesn’t belong at all. No lineage of any value. No place in the story.

The idea behind the belly of the beast motif simplifies to the question, “What will the hero do when he/she has nowhere left to run?” Luke essentially commits suicide rather than turning to the dark side. That moment solidifies that Luke Skywalker is the man and the hero the galaxy needed him to be; Rey, on the other hand, goes into the belly of the beast, finds out her parents are not important, and leans into the only relationship that she feels any real connection to at that point. Kylo Ren.

Even despite its lack of literary sustenance, the idea the Rey is a “Mary Sue,” is completely and totally obliterated in this moment alone. She doesn’t make the sacrifice Luke did; she is flawed. She runs not away, but rather towards, the person that clearly has no interest in her well being, Kylo Ren. He offers her the place the dark side cave teased her with. He offers a place to belong, and the promise that she is in fact not alone. Rey accepts this, at least in part, by returning the sentiment and offering Kylo her hand. Prior to going into the cave, Rey’s search for belonging drove her, and thus she could not understand why Ren would be so callus as to kill his own father. He had everything she ever wanted, and the idea that he would literally “let the past die, [and] kill it” if he had to was beyond Rey’s realm of understanding. The cave, however, shows her how she can be surrounded by people and still feel alone.

This begs us to look deeper into the minutiae of each moment in the cave to see how, in a manner of moments, Rey went from someone who saw Kylo Ren as a monster to someone who understood the pain that tears at Ben Solo’s soul.

Rey’s initiation into the cave comes more by force than by choice. The Force, albeit the dark side, is demanding that she make a choice. It leaves her all alone but this time with nowhere to run away from her pain. In fact, the Force puts her into water, the antithesis of everything Rey has known growing up on the sand planet of Jakku. That junkyard was familiar. This territory is new for Rey, and if she doesn’t do something about it she will literally drown. 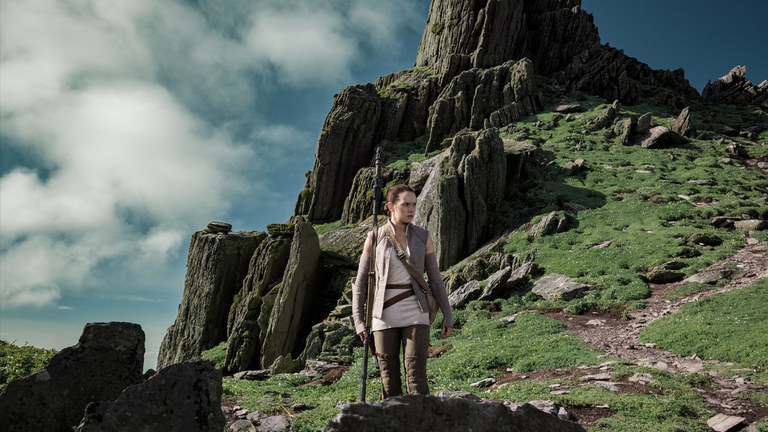 Albeit time on Ach-To works differently, it is important to note that the time between Rey leaving Jakku and diving (or being Force pushed?) into the cave does not cover a grand span of time. In only a few days, Rey has gone from someone who was waiting to be saved by her family to someone who is trying to figure out her place in the grander scheme of things. But Rey has always depended on others with regards to her self-worth. First it was the idea of her parents returning, then it shifted to Han Solo, and finally Luke Skywalker. But in none of those people did Rey find the meaning behind who she was; the cave forces her to confront that.

Bewildering though it may at first be, the infinite Rey’s we see has a very simple explanation behind it. All the Rey’s do the same thing. All the Rey’s get the same result. It is a metaphor for Rey’s life. She has always done the same thing (waiting for her parents, trying to find her self in others) and somehow expected things to change. It is only when she does something new, reaches for the mirror, that she is able to break that cycle.

Break the cycle, she does, but it leaves her feeling utterly alone. This is new ground for her. In fact, the mirror itself showed her that it doesn’t matter where she comes from, and for that matter does not matter who her parents are, because the person she needs to look to to find her self-worth is herself. Still, it is new ground for her and it leaves her feeling alone. Worthless. For the first time she does not have someone else to look to. Not her parents. Not Solo. Not Skywalker.

Enter Kylo Ren, stage right. Ben Solo severed his connections with others by choice. He burned down Skywalker’s temple and killed his father. Despite a clear connection, he has even forgone a relationship with his mother in favor of the idea that power can be the healer of all wounds. To Rey, he is no longer simply a monster. He is a man who is in a very similar situation to her. Alone and trying to find his way in the galaxy.

Ren thus becomes the de facto person for Rey to come to depend on. But now she knows she can’t do it the same way she always has; she has to break the cycle.

Interestingly enough, like all of our heroes in the film, she fails, and fails epically. Instead of depending on Kylo to find her place, she flips the script and offers to be the place for Kylo. Instead of looking for help from others, she becomes the help for others. A grand, honorable, daresay Jedi-like decision, right? Almost. The problem comes in the motivation. Rey’s motivation is not pure and altruistic like Luke’s decision in Return of the Jedi. She is still trying to validate her worth. Trying to figure out where she belongs based on others.

Thus, Ben Solo’s choice not to be redeemed is critical not just to his story arc but to Rey’s. Now she is literally broken down to the barest of bones. She is alone, and without hope. But like Luke before her, she makes the hard choice. To trust the light, even if it is not providing the answers she wants. To trust the Force.

Credit must go to Daisy Ridley for her exemplar performance in this regard. Ridley takes Rey from a place of curiosity and hope, into the cave, where  anxiety rules her expressions, to a completely broken person. Without words. It cannot be overstated how important that is to the character’s arc in this film. To cap it off, the final moments we see Rey in the film (on the Falcon, hugging Finn, and sitting with Leia) show a character who has a new found stability. She has found where she belongs, and thus can reach her full potential. With Finn, Leia, and the Resistance, Rey’s worth is not based on what she can do. It is not based on how said characters feel about her. Rey matters because she is Rey. Not Mary Sue.

13 thoughts on “On Mirrors and Mary Sue”