Among the many hallmarks of mythology, there are a few that stand to the forefront. One is that it shapes life and culture going forward. For instance, Dante’s Inferno revolutionized how people envisioned hell. Many of the modern visual interpretations come not from any particular religion, but from Dante’s Inferno. Further, mythology must stand the test of time, being something that relates to the human condition in any day and age. There are still stories being told about Greek gods (for instance Percy Jackson), and many a child explores The Odyssey and Iliad during their high school years.

In the modern era, there is perhaps no greater mythology than Star Wars. Books upon books have been and will be written about the mythological implications of Star Wars, but with regards to the aforementioned points Star Wars is most certainly a mythology that must be respected. It is unparalleled save for maybe one other story, that of Harry Potter.

There is, to my knowledge, no direct influence that Star Wars had on Harry Potter, but the reality is that the culture was changed from May 25, 1977 going forward by the galaxy far, far away. Almost all storytelling that has been done since that point has been, whether directly or subconsciously, impacted by Star Wars in the same way Star Wars was impacted by the mythology that came before it. Harry Potter is, without doubt, a Star Wars story.

A good villain makes a good hero. But a deep and complex villain has a lasting impact beyond the hero. This is true for Voldemort, the villain of the Harry Potter saga who sought to conquer death through accumulating power. However, Voldemort learns, the hard way, that death comes for all, and it is those who accept it with grace and willingness that truly overcome.

Throughout the prequels, conquering death is a motivating factor for Anakin. First there’s the death of innocence, caused by his being raised a slave with no control over his own life. Anakin never gets to be a child, and experience the joy of imagination that comes with freedom. Everything, like the orphaned Voldemort, was about survival. This motivates Anakin to one day come back and free the slaves, allowing them to gain their freedom, their life, and conquer the death that is there day to day reality. But like Voldemort’s flawed attempt to create a pureblood wizarding society, and therefore rebuild the “purity” or wizard kind, Anakin is never able to build his perfect, slave free society. 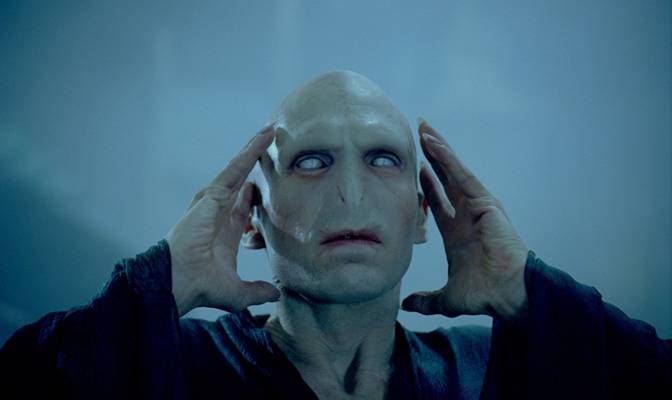 Then death in its most visceral form begins to take the forefront. Anakin continues to fight for people’s freedom, as can be seen throughout the Clone Wars, but something changes when he realizes that he cannot literally save people from dying. Anakin believes that, as the “Chosen One,” he should be able to have any power he desires. In the same manner, Voldemort believes that it is his right as the heir of Slytherin to be able to have any power he wants, particularly overcoming death. Anakin seeks that power to find that power to save Padme, and to do so must go to the darkest place possible; Voldemort tries to gain that power by splitting himself into seven Horcruxes that will allow him to continue living even if his body dies. Both men must do the most heinous of acts, murder innocents, to gain this power. And while Voldemort has a modicum more success than Anakin (as he is able to actually split himself into the Horcruxes, while Anakin is not able to save Padme), in the end both men learn that death comes for all.

The Wand Chooses the Jedi

Recent canon novels, Rebels, and even Rogue One, have added light to the mythology of the kyber crystal, the source of power in the Jedi’s lightsaber. The kyber is an actual living source of the Force, and therefore the Jedi are able to commune with it, allowing them to yield their weapon with elegance and precision. This power, however, is prominent not only for Jedi. Chirrut Imwe’s staff, which has a kyper at its end, seems to enhance his senses. Moreover, the Death Star uses kyber crystals to blow up planets, which brings in an important idea: power is only as good as those who yield it.

In the younglings arc of The Clone Wars, we get our first glimpse into how a Jedi gets his/her kyber crystal. It calls to them, like it does no other being. Just like the wand chooses the wizard, the kyber chooses the Jedi.

When the proper owner is using the wand, the wand is a source of great magic. It is a seemingly symbiotic relationship. Handled by someone who is not its proper owner, a wand become more of a blunt instrument than a precision weapon. In the same way, a lightsaber, used by a Jedi, is an elegant weapon of a more civilized time. The kyber connects with its owner, and the two become one. But when evil takes hold, the kyber is bleed, taking on a crimson color.

The best parallel to this in the wizarding world is the Elder Wand, the strongest wand in Harry Potter lore. This wand allowed Albus Dumbledore to become the greatest wizard of all time, but when used by Voldemort, who stole it rather than winning it in battle (as is the proper way to change a wand’s allegiance) the Elder Wand becomes, well, normal. Similarly, a kyber crystal that is not used by its proper owner loses its grace and elegance, as it does with Kylo Ren. Kylo, most likely in trying to “bleed” his crystal, has a cracked kyber crystal in his lightsaber, and it is clear in his fight with Rey that the kyber is not communing well with him. He takes swings like a teenager trying to use a medieval sword. 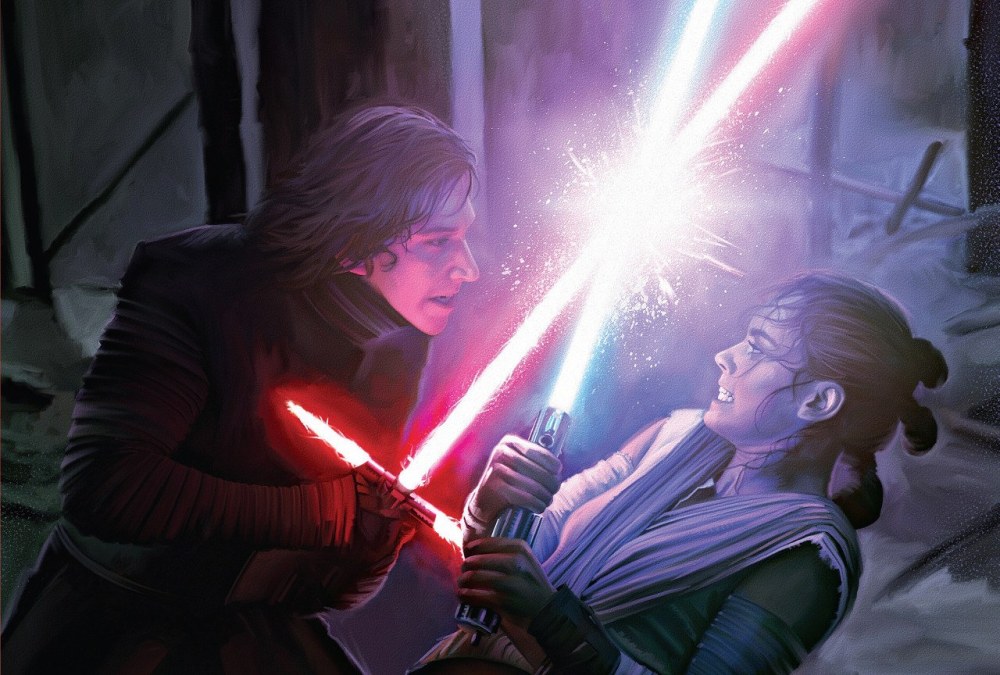 That fight also adds another light to the comparison between wand and kyber. The wand that calls to Harry is made with a phoenix feather. That phoenix gave only one other feather, which resides in Voldemort’s wand. Harry’s wand calls to him because of his link to wizarding history; the lightsaber of Anakin and Luke calls to Rey, rather than Kylo Ren, because of her link (in some way, shape, or form) to the history of that family. The details of that are still being told as the sequel trilogy evolves, but the bottom line remains the same. Wand or lightsaber, a true hero respects his/her weapons and the responsibility that comes with it.

A Hero Must Journey

Joseph Campbell’s explanation of the hero’s journey sets a foundation for what makes mythological stories lasting and impactful, and has been sited time and again as a major influence on George Lucas. J.K. Rowling must have read Campbell as well.

The journey of a hero goes deeper and farther, enough to fill shelves upon shelves of novels. Luke and Harry would make up a great many of those texts.

One thing that makes Luke and Harry’s journey so enjoyable, and relatable, is that they do not go on the journey alone. They have friends loyal to them,  who are willing to die right next to them if the path calls for it. 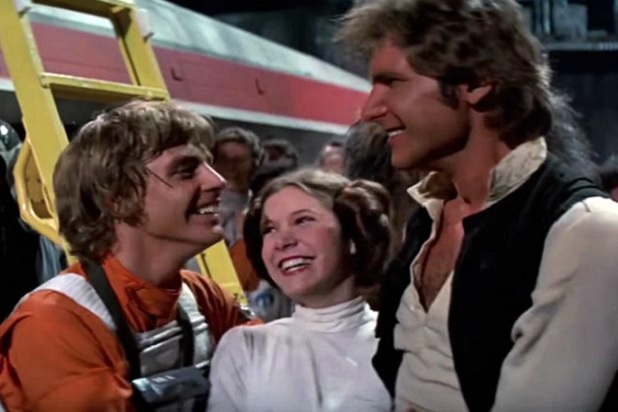 Even the character traits of Han and Ron are similar. Ron is not always always able to voice how he feels, be it to Hermione or Harry, but his actions always show his loyalty and love for his friends. Han, braggadocios and seemingly arrogant, is always there when Luke needs him, even though he doesn’t say it. There is an unspoken connection only the grandest of friends can comprehend. 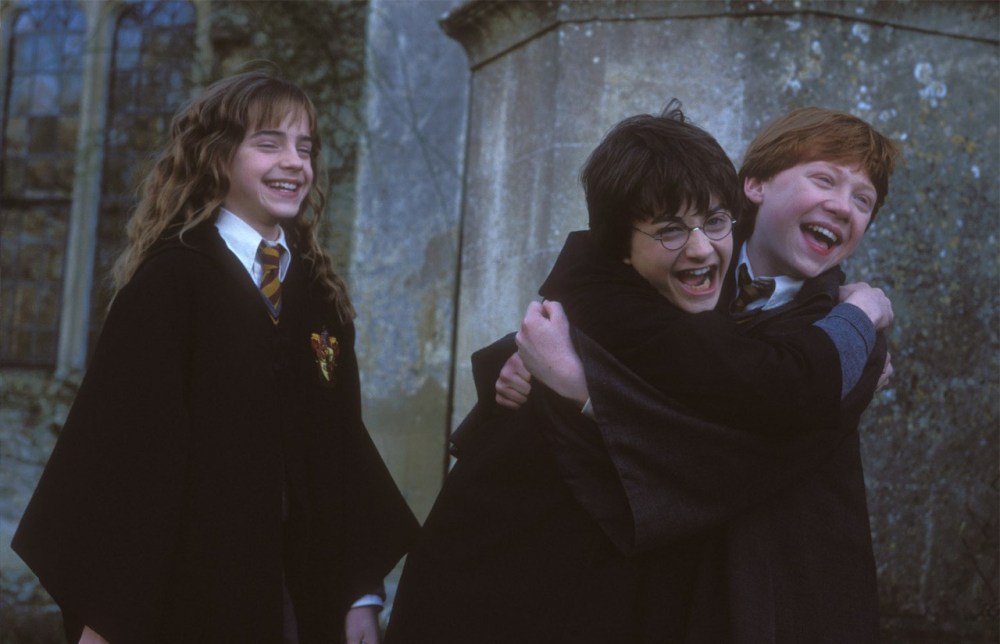 Then there is the strong females by the hero’s side: Hermione and Leia. Leia comes from a different world than Luke. A world of royalty and politics. Hermione comes from a home of love and kindness, whereas Harry comes from a home that treated him like the flies that hang out around elephant turds. Further, Leia and Hermione are wise, loyal in the hardest of moments, and always learning. This allows both wonderful women to be the rock the hero needs in the hardest moments of their journey. Leia may try to convince Luke not to confront Vader, and Hermione might fear for Harry as he ventures into the Forbidden Forest, but both heroes know they have the support of their strong female counterpart, who is there for them no matter what is to come.

As Hermione says, “When are you going to get it into your head? We’re in this together!”

Harry is protected by the love that allowed his mother to sacrifice herself to save his life. Luke, in those final moments on the second Death Star, is also saved by the love of a parent. Love wins.

Love wins when Harry and Luke’s friends make sacrifices to help save them, be it Han returning to Yavin, Leia hearing Luke’s call at Cloud City, or Ron and Hermione traveling into the Chamber of Secrets to destroy a Horcrux.

Love wins when the mentors sacrifice themselves. Ben dies on the Death Star to protect Luke, just as Lily, Sirius, and Dumbledore all die to protect Harry.

Star Wars has made it forty years, and seems to be getting only stronger with more movies, novels, and shows adding to the lore. Harry Potter may be only half Star Wars’s age, but the power of its mythology is going to impact generations. Hogwarts may feel like home, but it would fit in perfectly in that galaxy far, far away.