The finale of Rogue One:A Star Wars Story is one of the highlights of the film. At the conclusion of an epic battle, Princess Leia is handed the technical plans to the Death Star and her ship narrowly escapes the onslaught of an enraged Darth Vader.

After murdering his way to the ship’s door, Vader stands helplessly and turns off lightsaber as the Tantive IV detaches from its host ship and disappears into the vastness of space.

The next thing we know happens is at the opening of the original Star Wars film, when Vader’s Star Destroyer – the Devastator – catches and disables the Tantive IV. Stormtroopers invade the ship and Vader follows behind, imploring them to, “tear the ship apart,” until the plans are found. 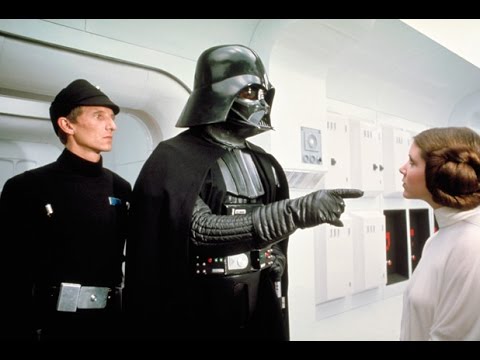 On the surface, it all fits together well enough. But a lingering unknown question remains: how long did it take Vader to catch Leia’s ship?

The answer is important for context of the ending scenes. After Leia secretly gives the plans to R2-D2, she and Vader have the following conversation :

Leia: Darth Vader. Only you could be so bold. The Imperial Senate will not sit still for this. When they hear you’ve attacked a diplomatic…

Vader: Don’t act so surprised, Your Highness. You weren’t on any mercy mission this time. Several transmissions were beamed to this ship by rebel spies. I want to know what happened to the plans they sent you.

Leia: I don’t know what you’re talking about. I am a member of the Imperial Senate on a diplomatic mission to Alderaan.

If Vader caught up to Leia in a matter of hours, her claims are beyond bold. He just watched that ship escape from the battle at Scarif and she is claiming she is on an innocent Senate assignment. It actually comes off a silly that she would expect such an excuse to work.

However, if it took Vader days or weeks to track down Leia’s ship, her attempt at explaining away her mission is more plausible and might have possibly even worked.

It’s easy to assume the Tantive IV went straight from Scarif to Tatooine to grab Obi-Wan Kenobi. But that would make it less likely that Vader would be able to catch the ship. The Sith Lord would have had to get back to his ship, somehow figure out where Leia was headed and close the gap quickly.

Thanks to a reddit user, it was calculated that it would take both ships around 10 hours to get from Scarif to Tatooine : 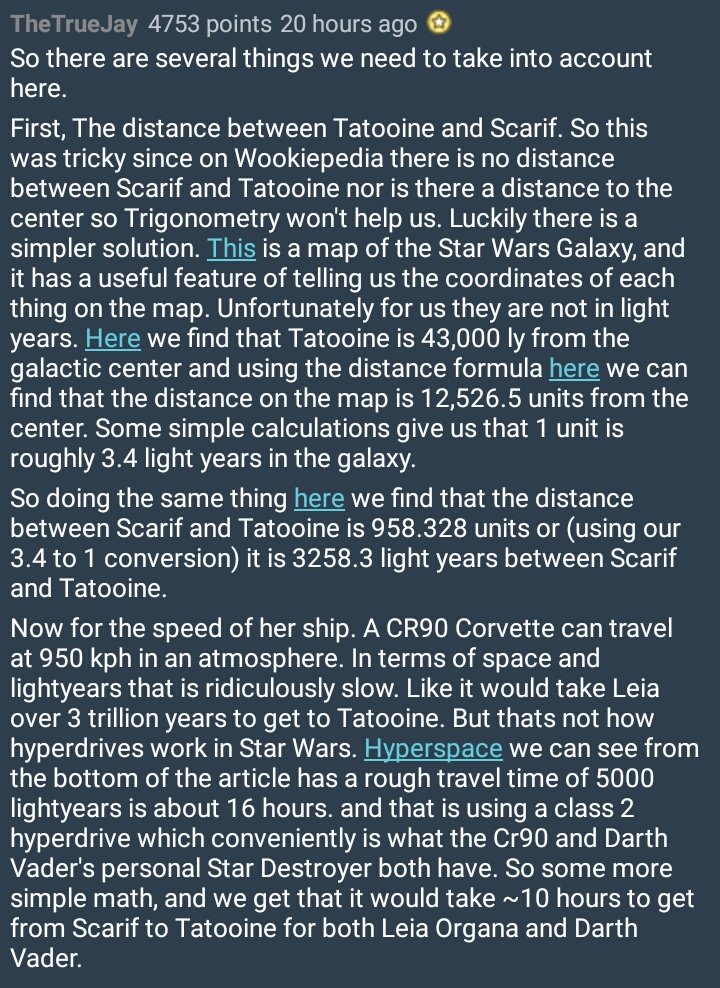 But that doesn’t explain how the Tantive got caught.

What is the possible explanation? Was there an Imperial spy within the Rebellion that reported Leia’s destination? Did Vader throw a dart at a map of the galaxy that happened to land in the correct spot?

The likeliest explanation – or at least the one that makes the most sense to me – is that Leia’s ship took a circuitous route to Tatooine in order to cover its tracks. This gave the Imperial networks more chances to spot the ship and decipher where it may be headed.

We are operating under the assumption that in the Star Wars universe you can narrow down a range of destinations based on the direction in which a ship goes into hyperspace. This has never been established in a Star Wars film, but it seems as logical as any other Star Wars “science”.

With all of this considered, here is how I see the post-Rogue One events:

The Empire puts out an alert describing the Tantive IV and labeling it as a high priority target. The Tantive IV takes a zig-zagging route to Tatooine in order to avoid being followed.

However, each time it is spotted the Empire is able to take note of the ship’s potential destinations when it jumps into hyperspace.

Imperial ships fan out in the direction of each possible Tantive IV destination to report back as soon as the ship is spotted. At each destination, sighting of the ship is relayed to Vader, who has his ship respond immediately, closing the gap with each jump.

When the Tantive IV gets to Tatooine, it may believe it is home free, when the Imperials have really been solving the puzzle the entire time. The ship stays in the Tatooine system because that’s the destination, giving Vader the time he needs to finally catch the ship.

Maybe I think about this stuff too much.

One thought on “To Catch a Princess”

Content Creator | Social Media Manager | Staff Supervisor | Problem Solver | I'm Online Too Much In more than 14 years of experience working with media companies large and small, I have had a front-row seat for the evolution of content from newspapers and radio to blogs, podcasts and social media. As a result, I have ventured into many professional waters and gathered and range of knowledge that is hard to match. Have I mapped out social media strategy for clients? Yes. Have I created engaging online communities? Absolutely. Have I handled public relations communications for companies of every size? Definitely. Have I built and operated my own websites? Quite a few over the years. Have I contributed to the blogs and websites of others? Frequently. Did I cover live events as a writer and reporter? More than I can remember. Have I written and edited copy under extremely tight deadlines for a newswire? Indeed. Have I broadcasted over the airwaves? You betcha. Did I work on a weekly newspaper? Of course. As with all great stories, mine has unfolded in episodes, reaching a juncture where I can bring together my editorial and technological skills to deliver powerful messages. My passion revolves around helping companies develop a significant presence and maximize visibility of their identity online via content creation, emerging social platforms and internet communities. My experience ranges from current roles in social media, public relations and marketing copywriting to a rich history in SEO, blogging and reporting. I am fascinated by the intersection of creativity and technical savvy required to effectively capture an audience. I am always looking for the start of my next adventure and opportunities to learn and meet great people so feel free to reach out to me. It's not hard to find me online.
%d bloggers like this: