When George Lucas made the first Star Wars film, his intention was to provide a fairy tale for the modern age. A fairy tale that taught the lessons kids were not learning from the darker films of that time period. When the prequels came, Lucas was faced with the apparent oxymoron of conveying the life lessons and themes of Star Wars despite the fact that the story had to be a tragedy. If “Jedi Night”taught us anything, its that he taught his protege, Dave Filoni, how to successful walk that tightrope. If “Shattered” taught us anything, it’s that Filoni revels in being able to do so.

Throughout the episode, there is a sense that Ahsoka knows things are not lining up. Kevin Kiner tickles our eardrums with haunting music even when things should have a fantastic fanfare. Things are not right, and yet Ahsoka can’t seem to put her finger on it. Rex and his clone brothers take care of that when they put their fingers on the trigger and try to kill Ahsoka per the execution of Order 66. 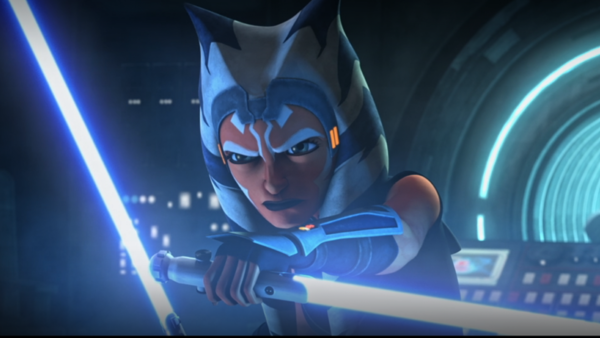 What Ahsoka does next is extremely important, but to fully understand it we must look back at her time with the Martez sisters. Having just recently left the Jedi, Ahsoka is trying to figure out who she really is; she knows she believes in the morals of the Jedi, but can she exist in the “real world” once she no longer lives in their ivory tower? The answer is yes. And no. Ahsoka cannot be a Jedi, she learns, because the Jedi at this time have lost their true purpose of serving and protecting the people. They say they’re fighting the war to protect, but those are just platitudes. At the conclusion of the arc, Rafa Martez says to Ahsoka, “You might not think of yourself as a Jedi, but you act like one. Or at least how I want them to be.” This is the space wherein Ahsoka can exist. Be what the Jedi should be.

Later, in the Ahsoka novel, we see this lived out in how Ahsoka helps the Larte sisters. But like any newfound morality or faith, first it must be tested. Order 66 is that test, and it seems as if Ahsoka is passing.

The most important thing that Ahsoka learned from Anakin is that you protect your friends and found family. It is the restrictions of the Jedi, and Anakin’s need to be independent in a system that washes away identity, that stops Anakin from being able to do so in a healthy way. But “we are what they grow beyond,” and Ahsoka has grown beyond Anakin in this regard. She stands by the Martez sisters when she easily could have walked away from the whole situation, and she does the same for Rex.

When Rex pulls his blasters and tries to assassinate Ahsoka, she has a decision to make. The darkness is knocking, what will be your answer? Where Anakin allowed the darkness to consume him, Ahsoka sees it as a reality that she will not cower before. The new Ahsoka is going to always look out for the people around her, and the people who have stuck with her. Rex is certainly one of those people. 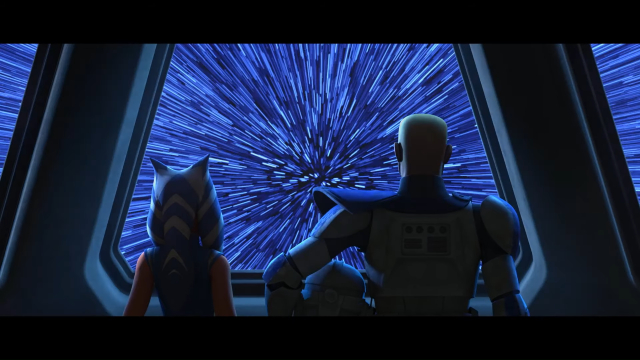 The pain of this, though, is that one cannot help everyone. The Jedi try but fail because they’ve lost the connection with the individual persons. For Ahsoka here, that person is Rex. Earlier in the episode, the duo are questioning what it means to have been raised a soldier, leading Rex to share an insecurity of his own, “Gives all of us clones a mixed feeling about the war. Many people wish it never happened, but without it we clones wouldn’t exist.” Ahsoka replies by saying, “Well, then perhaps some good has come from all of it.” She is re-establishing the importance that Rex has in her life, and reminding him that they are family.

Part of that family, however, is going to be beyond her protection. Moments later, Ahsoka hears what happens to Anakin in the chancellor’s office. Throughout the arc there has been a sense that Ahsoka has something to tell Anakin but can’t quite bring herself to do so. Now that chance is gone, whether she realizes it or not. What she does know is that he is not someone she can protect right now, but Rex is. Despite him trying to kill her, Anakin taught Ahsoka to be loyal, and loyal she stays. She does not kill even a single clone and stays on the ship even though she could have tried to find an escape pod before they were destroyed. Not only that, she does not try to hide. She helps. She helps those in need right in front of her, the clones, with the hopes that it will help the larger picture. Rebellions are built on that same hope.

No one came into The Siege of Mandalore expecting a happy ending, and even less so once learning that it happens concurrently with Revenge of the Sith. But like all good Star Wars, even in the tragedy it teaches. So, what do we do in the dark? We help. We protect. And we never give up….

One thought on “What Do We Do in the Dark?”