I think we can all agree that K2 stole the show for a lot of us. It’s always so compelling to see humanized droids, probably because by definition droids are machines and by no means should they be able to be very human. But K2 is the newest addition to the Star Wars universe that does just that, smashes through the droid standards like there’s no tomorrow and owns the spotlight with brilliant one-liners and a sassy attitude.

I think there’s something to prick at the fact that droids in the Empire are never touched and focused upon, whereas the good guys always find themselves with the best companions. There’s even the scene where Cassian, Jyn and K2 walk through the hallways of Scarif’s data center, and you can clearly see another K2 unit walking past the trio; that K2 unit is very stiff, very ostentatiously mechanical, rigid and emotionless…quite like what a droid/robot should be. And then the camera shifts toward our K2 and we can clearly see him walking with more briskness and more fluidity in his step, also paying attention to his surroundings.

It’s a very suggestive image that sends us back to Anakin and R2. Star Wars galactic citizens tend to not give droids any special treatment with the exception of very few people: Anakin, Ashoka, the Ghost Crew, now Cassian and later on, Luke himself. Oh, and Bail, because Bail has a few moment when he’s very affectionate towards R2. C-3PO is the droid Anakin himself made and in comparison to other droids of his model, 3PO has quite the mouth, the temperament and overall, personality.

R2 starts to shine during the Clone Wars, where he’s directly under Anakin’s ownership, and Anakin is visibly attached to the little guy, treating him and talking to him more as he would towards a friend, definitely not a droid. R2 picks up from Anakin’s behavior, as he’s very altruistic and quite the sass master himself. Ahsoka also takes after her master, nicknaming droids just as she does her friends and usually acting as if bound by mutual trust rather than ownership.

More so, as Clone Wars came later than Episode III, we can recall upon the exchange between Anakin and Obi-Wan during Palpatine’s rescue; Obi-Wan is clearly distressed with Anakin treating R2 as a friend, and feels like it’s absurd to call him by his “name” or appreciate his work, and the same thing occurs with Mace Windu in his arc with a Boba Fett that seeks revenge for his father’s death.

There are very few people who treat droids differently, and not only the droids benefit from their eventual humanization, but it also says something vital about their owners. Because after all their owners are the most human; they are passionate, kind and empathetic, they are a contradiction to both the Jedi dogma of refusal of attachment and the dogma of the Sith/Empire who, ironically, denies attachment and proper feelings as well (with the only difference being that they harness the hate and pain that is resulting) just the same as the Jedi. 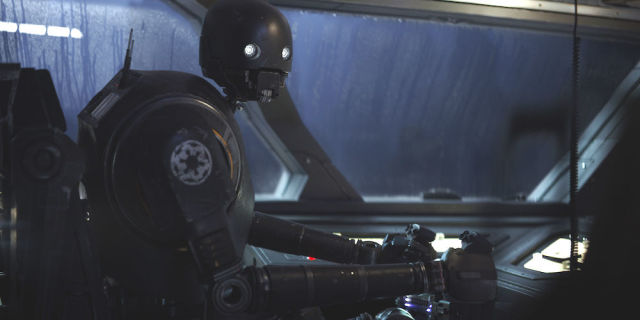 Droids in Star Wars are a reflection of beautiful souls, and K2 is yet another affirmation of this. We don’t know what his history with Cassian is, sadly, but Cassian undeniably personified him and turned him into as much of a compelling character as the other leads. The moment of his death is heartbreaking to say the least, more so as he dies protecting the ones he loves, propelling them forward to hope. But perhaps, in light of what was said here, what if K2’s death – especially since it’s the first of the squad – symbolises the death of the very humanity that managed to pierce through his circuits and the very death of the ones who sowed it there?

As much as Rogue One ends with the message of hope, throughout the movie we repeatedly witness people losing their moral compass, becoming and evil in a fight with another evil, so what if K2’s death announces this very loss of morality and humanity in people in favor of detachment and sacrifice needed to be made for the cause?

Irina ・20 ・☯ ・♀ Rum mercurial fille, wandering the plane of existence, thirsty for knowledge and successfully choking on my aspirations + ∞ⁿ...
%d bloggers like this: